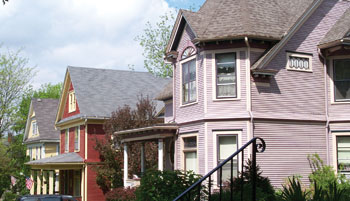 
Most intact and high-style historic district representing the mid-19th century to the early 20th century.

This grand Victorian neighborhood is the premier historic area in Rock Island, where old houses are regarded as treasures. Great architecture, constant restorations, and a first rate neighborhood association have made this area the place to be in the Quad Cities for old house lovers. More than 550 homes make up the Broadway collection, which has copious examples of Queen Anne, Italianate and Colonial Revival architecture. The earliest home is from 1854, but most of the area was built between 1890 and 1915. The Broadway neighborhood is listed on the National Register, hosts outstanding Tours of Homes each May, features 22 Rock Island landmarks, and is nationally famous for founding the “Great Unveiling” program, where artificial siding is removed from historic homes. Learn more about the ambitious and innovative Broadway Historic District Association.

Aggressive growth came to the Broadway neighborhood, located just a few blocks south of Rock Island’s downtown, in the 1860s. Additions were platted by Webber, Mixter, Buford, Schnell, Spencer, Dart and others. As convenience was the impetus to the neighborhood’s development, the sections of Broadway closest to downtown developed first. The area north of 9th Avenue developed mainly prior to 1880, while the area south of 9th Avenue developed primarily from 1890 to 1915, with development moving progressively south with time.

The name “Broadway” comes from the original name of 23rd Street. Broadway Presbyterian Church at 710 23rd Street still harkens back to the historic name. In 1876, a new name system for streets was implemented, creating the current numbered streets and avenues throughout the city. “Broadway” is the only historic street name from the previous system that remains in use in any form. In 1988, the neighborhood’s Broadway Historic Area Association adopted the historic street name to perpetuate this neighborhood identity and to promote the preservation of the district’s historic resources.