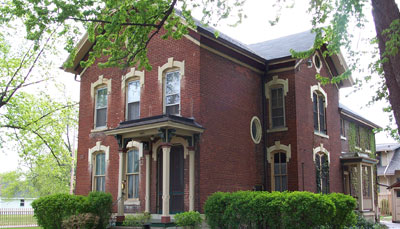 
Excellent example of a brick, front gabled Italianate that is common in Rock Island, but much less so across the country.

Charles Hansgen was an early Rock Island settler, arriving in 1854. He worked as a railroad conductor, managed the Union Hotel and ran a grocery business for 31 years. He married Sophie Marg Baumgaertel and they had nine children.

The youngest son, William, eventually had ownership of this house and never lived anywhere else. He was born here on September 18, 1876 and died here on December 19, 1955. It is believed the home was converted to apartments around the time he married Maude Ann Rice in 1900. They had four children. William spent most of his adult years working as a gas meter reader for Peoples Power Company and was active in civic life. He served as president to three organizations: Rock Island Rotary Club, Rock Island Manufacturers Club and Rock Island Community Fund. Maude was a charter member of the Rock Island Woman’s Club and an early member of the Rock Island Y.W.C.A. The house was converted back to a single family home in the early 1990s.