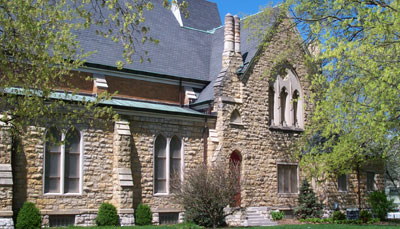 The cornerstone of Broadway Presbyterian Church was laid on May 2, 1876. The first services were held in February 1877, but the formal dedication didn’t take place until November 3, 1878. A burgeoning congregation prompted two expansions in 1895 and 1920. When a tragic fire engulfed the magnificent stone church on March 17, 1947, headlines in the Argus newspaper read: “Only the massive stone walls survived the conflagration.” Local architect William Stuhr designed the new sanctuary and reversed the interior orientation from south to north.

The Gothic appearance of this structure is maintained with arched window tops, and small stone-capped buttresses. Notice the decorative chimneys and chimney pot on either side of the east gable. The gabled roof of the bell tower is unusual for buildings of this style.

John Volk was the wood contractor and McConochie and McFarlane, whose own home is just up the street, were the stone contractors.