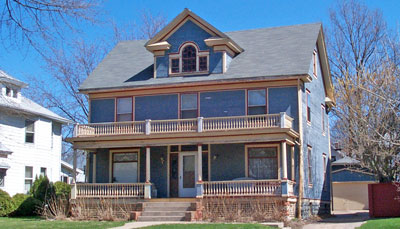 Colonial Revival architecture is not uncommon in Rock Island, but this is an exquisite example of that style. The fenestration exhibits this style’s typical symmetry. Classic to the Colonial Revival style is the Palladian window, prominently shown here in the front dormer. This house also features leaded, beveled glass sidelights. Instead of a fanlight above the door, the McFarlane house features more leaded and beveled glass. Rock-faced red sandstone is incorporated under the porch, alternately with the typical gray sandstone. The porch has Tuscan columns atop pedestals and a balcony with turned spindles.

Robert McFarlane built this home for $4,500 in 1896. He lived here with his wife, Rachel, and children Margaret, Duncan, and William until his death in 1902. Robert, a native of Scotland, was a master mason at the Rock Island Arsenal for 25 years, and family records indicate he worked there as early as 1866. It can be concluded that some of Rodman Avenue’s famous stone buildings on Arsenal Island were projects McFarlane worked on. He also worked on the addition to the Broadway Presbyterian Church and Lincoln School. Descendants of the McFarlane family owned the home until about 1995.