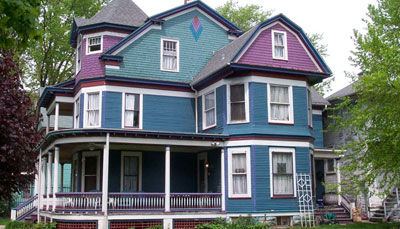 
Well restored example of a house blending Queen Anne and Shingle styles in an intricate roofline that is associated with Illinois Oil Company owner Frank Welch.

This Queen Anne – Shingle style house was built about 1897 and is named for long-term resident Frank P. Welch, who moved here in 1915 and enlarged it in the 1920s. Welch was a founder of the Illinois Oil Company. Welch’s widow, Grace, lived in the house until her death in 1990. She occupied one of the eight apartments into which the house was divided after 1940. Careful restoration has returned the home to its single-family status.


The Shingle style evolved in the late 19th century from the Queen Anne movement. Among its features, all present in this example, are multi-light sash or casement windows, eaves close to the wall, pedimented gables, and shingle siding – three shapes here – covering all or a large part of the structure.

The gambrel or barn style roof, common to the Shingle Style, is used on the small “ells” to the north and south, as well as on the main body of the house. Towers are common to the Shingle style. The Welch House tower has a low-pitched roof and is broken by a gable so that it is integrated more fully with the overall roof design. Nearly all of the attic windows have multi-paned upper sashes and the dormer has a multi-paned casement window.

Wrought iron fencing, manufactured by Illinois Oil metal works, surrounds the house and yard. In 1999, the tall, concrete retaining wall the fence originally rested on was removed, the fence refurbished, and was reinstalled atop a terraced slope. A church once stood on the land south of the house. The church property was later a formal garden with a circular fountain.