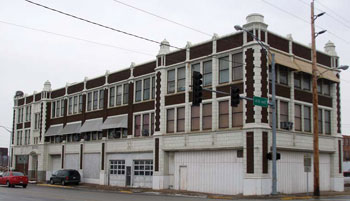 Brothers Frank P. Welch and James M. Welch began with a capital of $800 in 1908 to market oil directly to the consumer. By 1922, sales were $18 million, so they constructed this magnificent brick and terra cotta creation in 1922-23. The terra cotta colors are limited to blue and ivory and feature snake and serpent forms. The building was designed by the architectural firm of Cervin & Stuhr, although firm associate Rudolph Sandberg was chiefly responsible for the terra cotta design. Automobile bays have been filled in on the first floor, and historically the corner featured a nine-pump filling station.

At the time this structure was built, there were 800 men on the payroll, 142 salesmen and two refineries working three shifts. The sales territory had expanded to include Minnesota, Wisconsin, Kentucky, Tennessee, Oklahoma and Arkansas, in addition to Illinois and Iowa. Liability lawsuits, risky business decisions during the Great Depression, and the failing health of Frank Welch, who died in 1941, led to a decrease in assets for Illinois Oil Company. E.C. Jackson, who continued the business under the name Illinois Oil Products, purchased the business in 1942 on behalf of himself and three other investors.

In 2010, construction began on the conversion of this former office building and associated warehouse and manufacturing uses to residential living. The complex was renamed Jackson Square.

For more architectural information about this building, be sure to see Rock Island’s Modernistic Architecture.