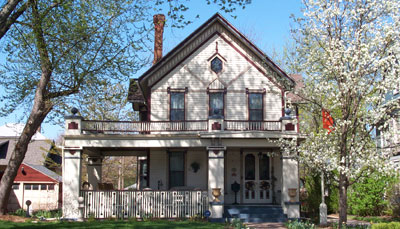 This local landmark was home to the founder of the A.D. Huesing Bottling Company. His company was founded in 1899 and is still in operation today.

Albert D. and Charlotte Huesing built this home in 1885, which was shortly after their marriage and during the time he was an alderman for the Fourth Ward. From 1893 to 1900 he was the City Clerk. In 1899, Mr. Huesing established a new bottling works at 1822 1st Avenue. The line of drinks for the A.D. Huesing Company included lemon, cream, strawberry, birch, and root beers, sparkling water, ginger ale and sarsaparilla. In 1902, the company also became the sole distributor in the Tri-Cities for Anheuser-Busch Brewing Association. In 1914, Mr. Huesing built a 2,000-ton ice plant, which was the first in the Tri-Cities. His sons Albert Jr. and Arthur were the managers. The A.D. Huesing Company added the Pepsi-Cola franchise in 1935.

This is another Rock Island example of the front gable Italianate architectural style, which is rare across the country, but more common locally. Additionally, this home offers some Eastlake influences. The Huesing home is wood frame and topped with a striking hexagonal window. The house has a unique Prairie-style, wrap-around front porch that was added sometime between 1906 and 1922. The brick columns and two levels of balustrades add to the Prairie-style influence. The distinctive house was carefully restored, including the removal of artificial siding, at the turn of this century.

The Eclectic carriage house, designed by Rock Island architect George P. Stauduhar in 1912, has a rolled roof and is unique.