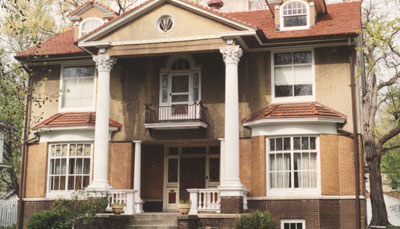 
This is the home architect George Stauduhar designed and built for his family in 1895. Of special note are the tile roof, the Classical pediment atop two story columns, the rounded bays, differing window shapes and the twisted copper downspouts. The second and third stories were first faced with cedar shingles, but after a fire in 1918 the surface material was changed to stucco. The interior is just as elaborate and fanciful as the exterior of the home. The dining room features a barrel-vaulted ceiling and the woodwork in the entry hall is very elaborate.


Stauduhar was a prolific and well-known architect in the Midwest. He received his architecture degree from the University of Illinois in 1888. He married Anna Elizabeth Farrell in 1891, and the couple had eight children. In 1890, Stauduhar established an architectural practice in Rock Island that continued until his death in 1928. According to materials contained in the Stauduhar Architectural Collection at the University of Illinois, the architectural practice included the entire Stauduhar family. The sons assisted in business arrangements and supervised on-site construction work, while the daughters maintained financial records and inventories. The oldest son, Charles, operated his own construction company and was Stauduhar’s principal business partner.

Although Stauduhar designed residences, commercial buildings, and even steamboat interiors, Roman Catholic churches of “Neo-Gothic Revival” style were his specialty. Over 200 churches of his design were constructed in the Upper Mississippi Valley, including eight in Rock Island County. Classical architectural styles are also evident in Stauduhar’s residential work, although he tended to incorporate his love of the romantic. Stauduhar's residential designs are known for their mixture of textures and architectural details, and his own home perfectly illustrates this.

Stauduhar died of heart failure on September 23, 1928 in Valley City, North Dakota while supervising the construction of a church. His 36-year old son, Charles, was killed the next day in an automobile accident while traveling to make arrangements regarding his father's death. Thus, the Stauduhar architectural practice came to an abrupt end. Family members continued to live in the Stauduhar home until 1975, and one year later Stauduhar’s architectural and personal papers were donated to the University of Illinois by his grandchildren, Charles R. Stauduhar and Mrs. Betty Jackson.