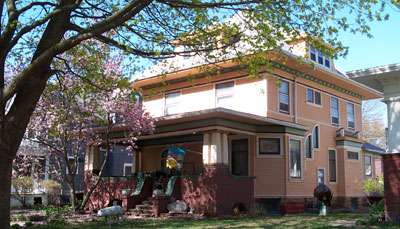 Well-known architect Leonard Drack had this home constructed for his family in 1904. Drack was a partner in the architectural firm Drack & Kerns. Their firm was known for designing such buildings as the Rock Island Public Library, the original Modern Woodmen Building (1504 3rd Ave.), the L.S. McCabe Department Store on 3rd Avenue and Immanuel Lutheran Church. Drack practiced in Rock Island from 1891 until 1909 when he moved to the West Coast to continue his career.

This home, much like the Young House located next door, is a great example of the transition between the asymmetrical Queen Anne building style and the simpler, linear design of Colonial Revival. The architect also incorporated the emerging Foursquare and Arts and Crafts styling in the design of his home. Of special note are the unusual red, rock-faced large bricks that form an arch on the porch. The tripled porch columns have a stylized mask motif at the top. Under the oversize eaves of the bellcast roof, the frieze features regularly spaced balls instead of dentils. These ball ornaments are repeated at the base of the balustrade over the north bay and on the south porch. The north side of the house features an original leaded, tulip pattern glass window and three stepped, half-arch windows in the stairwell.