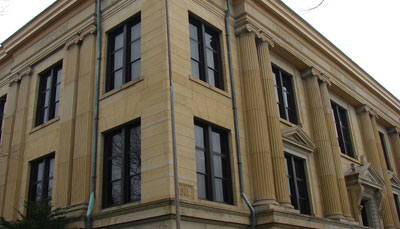 Opened in 1903, with a 1985 addition, this is the home of the very first Public Library in Illinois, established in 1872. Interestingly, it is NOT a “Carnegie Library.” Reportedly when approached for funding, Andrew Carnegie stated, “Any town that has Frederick Weyerhaeuser need not ask a library from me.” Though this story cannot be validated, Weyerhaeuser and his partner F. C. A. Denkmann did indeed make generous donations. Weyerhaeuser advanced the sum of $60,000 to start the building, at 5% to be paid back out of taxes, and donated again and again to meet costs. By the time the library opened in December 1903, the total cost had reached $90,448.20. Of this amount, Weyerhaeuser had given $17,869.32.

Local architects Drack & Kerns won the contest held for best plans and specifications for the new library building. The Renaissance Revival design is enhanced by four sets of double Ionic pillars rising to span the first and second levels. The entryway features a heavy pediment with scrolls and brackets.

Names of well-known writers and poets adorn the frieze. These names include Bancroft, Burns, Dante, Emerson, Goethe, Hawthorne, Homer, Hugo, Longfellow, Shakespeare, Tegner and Virgil. The basis for which names were selected is not known. Today, the least familiar name is probably Tegner, who was a 19th century Swedish poet. In a community that was so influenced by Swedish immigrants and home to Augustana College, it was important to include a Swede.

The first librarian of the Rock Island Public Library was Miss Ellen Gale, who served as head of the library for 64 years. When she retired in 1937, she had set a record for tenure as a librarian that was unequalled by any other library in the country. To commemorate her, and the fascinating history of our library, Dr. Roald Tweet wrote Miss Gale’s Books: The Beginnings of the Rock Island Public Library in 1997.