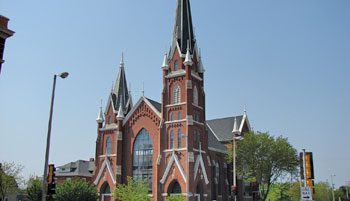 
Perhaps the best example of ecclesiastical Gothic Revival architecture in the city.

History of the Church

At 162 feet high, the main steeple of Immanuel Lutheran Church may well be the tallest in the community. Even the building’s secondary steeple is 108 feet tall, equivalent to a 10-story building. Its history begins in 1855 when a German immigrant to Rock Island sent a letter to St. Louis asking for a cleric to form a German Lutheran congregation here. By June of 1856 the first pastor of the “Evangelical Lutheran Immanuel Congress of United Augsburg Confession of Rock Island” was installed. The name, although descriptive of the beliefs of the new congregation, was a mouthful and soon was informally referred to as “the German Lutheran Church.” Today, we know it as Immanuel Lutheran Church.

This is the third Rock Island church for the congregation and the second on this site. The cornerstone for this church, which faces 5th Avenue, was laid on June 28 1896. The local architectural firm of Leonard Drack and George Kerns was retained for the design, which news accounts lauded as “pure Gothic style.” Built by contractor Nicolai Juhl at a cost of $25,000, it was made of St. Louis pressed brick with stone trimmings and measured 62 x 102 feet. The pulpit and altar were of ash, carved by the Variety Wood Works. The Gothic style is well expressed in the main windows and door openings, which have a typical pointed arch or “lancet” shape. The larger windows have smaller lancet windows as well as clover-shaped “trefoil” windows incorporated into their design. The magnificent stained glass panels were said to be donated by the ladies of the congregation. The nave seated 1,000, with more accommodated in the balconies that extended from either side of the choir loft at the south. In addition to window light, the nave was illuminated by two magnificent electric brass chandeliers, a gift of F.C.A. Denkmann.

The Immanuel Lutheran congregation sold the church in 2010 to a private individual, but the use continues as a church.

Major portions of this description researched and written by Diane Oestreich for the Rock Island Preservation Society’s “Postcards from Home” series.