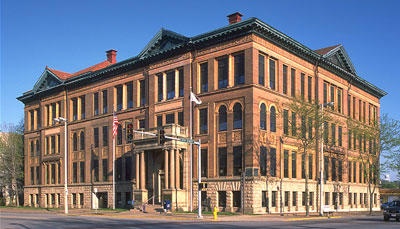 
Monumental design of the first local office of Modern Woodmen of America.

This budding fraternal life insurance company made a decision to go down river to Rock Island from Fulton in 1892, although the actual move didn't take place for a few years. In 1898, Modern Woodmen of America founder Joseph Cullen Root commissioned this Italian Renaissance Revival structure. In anticipation of the move, Rock Island architects Leonard Drack and George Kerns were asked to design a suitable headquarters building. Their firm, which had been a close second choice to design the courthouse and had earlier completed the London Building and Immanuel Lutheran Church, later would create such prominent Rock Island buildings as the Public Library and McCabe's Department Store on 3rd Avenue, as well as many homes.

The cornerstone laying on April 27, 1898, was occasion for great celebration. The keynote speaker was William Jennings Bryan, who arrived by train. Bryan, who soon would run again for United States president against William McKinley, was known as "the Great Commoner" and "the Boy Orator of the Platte."

Decorated with a granite portico, hammered copper ornaments, and bracketed copper trim at the roofline, the building shows symbolic emblems of woodcraft. The building space was doubled in 1904 with a $150,000 annex described as the exact duplicate of the original building, but without its porch. Another major addition filled in what was a three-sided courtyard. The architects designed the building to have a raised basement of rusticated stone, topped by three stories of brick and a French clay tile roof. There are terra cotta panels between the first and second stories that feature a torch. Several second story windows have arched tops, also set in terra cotta. Polished granite Ionic columns atop substantial bases surround the arched main entrance. A stone balustrade caps the columned entrance. The interior features marble and polished granite walls. Even the doorknobs show the MWA insignia.

Eventually, Modern Woodmen of America became the largest fraternal life insurance company in the world. Today, with the home office still on Rock Island's riverfront, it stands as the nation’s third largest fraternal organization. The concept started with Root’s wish to “clear away financial burdens like the pioneer woodmen cleared away natural burdens.” Modern Woodmen has had previous ties with other fraternal beneficial insurance companies including Woodmen of the World (also founded by Root), and Royal Neighbors of America. With a current insurance in force of over $28.49 billion, the company continues to follow its Creed: “There is a destiny that makes us brothers, none goes his way alone; all that we send into the lives of others comes back into our own.”