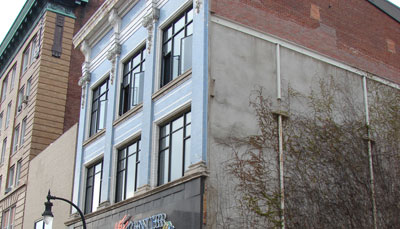 
Rock Island has only a handful of commercial Beaux Arts buildings, and the blue enameled brick is completely unique.

The London Clothing House, selling “gents furnishings” under the proprietorship of Jacob B. Sax and Meyer C. Rice, opened at this location in 1889. The business was successful, and in 1902, local contractor Nic Juhl completed a new building at the same location for $30,000. The store adopted a new advertising slogan: “Big Store, Blue Front, You Know Us.” The London Company closed in the teens, and S.S. Kresge Company moved into the street level with upper stories rented to Fidelity Loan Company and Brown’s Business College.

January 6, 1922 marked an evening of devastation for these businesses, as a fire swept through the building from what people believed to be crossed wires in the basement. Despite $75,000 in damage to the structure itself and over $150,000 in damage to merchandise and equipment, the Sax family decided to rebuild. Upon completion, The Argus reported, “handsome apparel store rises from ruins of most disastrous fire in Loop District.” Although the interior was updated, very few differences could be spotted on the outside. The original twin double hung windows and transoms were updated to a newer style with three glazing panels with transoms at each opening, similar to what exists today. The storefront level was modified from a single wide store entrance and right side stairway entry to three wide symmetrical display windows framing a pair of recessed doorways.

The first occupant of the restored building was Mosenfelders, Inc. In subsequent years, retail businesses here would include Waxenbergs, Block & Kuhl, and The Fashion. Since the 1990s, it has housed Quad City Arts and Gere-Dismer Architects.