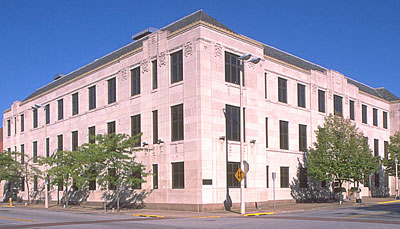 One of the finest examples of Art Deco architecture in Rock Island is the 1928 Royal Neighbors of America Building, which was designed by Pond & Pond, Martin & Lloyd Architects. It is a large L-shaped, three story Bedford limestone faced building with a Mansard style slate roof. The principal facade on 16th Street is symmetrical with three basic vertical bays, two end ones and a long central section. Each of the end bays hold three casement windows at each level. To break up the flat stone wall, shallow pilasters appear on each side of the panel containing the windows, with an additional flat pilaster at the first level. At the cornice level and in the spandrel area are ornate Deco style decorative elements. The long center section of the facade holds the opulent main entry that is a circular arched opening outlined with dentils, with carved reclining figures above.

The figures were sculpted by Nellie V. Walker, an eminent Chicago sculptor. She was born in Red Oak, Iowa and, at age 19, showed a bust of Abraham Lincoln at the World’s Columbian Exposition in Chicago in 1893. She would soon become friends with famed sculptor and educator, Lorado Taft, with whom she shared studio space. The cherubs and semi-nude women are intended to portray characteristics of womanly neighborliness and, at the same time, symbolize the ideas of protection and sympathy. Applied pilasters on either side of the doorway and upper window panels are fluted at the second and third floor levels. They are capped by a pediment with sculpted, low relief figures portraying the physical and spiritual side of the Good Samaritan, with other relief decorations at the cornice level.

The exterior brass framed glass doors leading to the foyer, and the tall transom area are richly designed with filigreed shapes protecting the glass sections. The cornice, beyond the center section of the building, is capped with a decorative bronze ornamental band whose patina reflects the green color of the Mansard roof.

The 3rd Avenue facade, while not as ornate, is similar to that on 16th Street. There appear to have been few changes in the exterior of the building since it was built. The main change was a sensitively done third floor expansion on the north side.