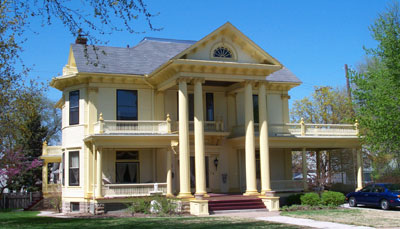 
Classical Revival architecture became popular after the Columbian Exposition in Chicago in 1893, which called for a return to the Classical order and a move away from “Victorian excesses.” The hallmark of this style is two-story columns topped with a pediment, and the Robert Wagner House perfectly embodies that characteristic.

The Wagner House has a three-bay front façade with a central entrance, a balcony and a two-story portico. Pairs of fluted Ionic columns support the pedimented porch. Evenly spaced brackets extend along the cornice lines beneath deep overhangs while larger brackets support the entrance balcony. Galleries with turned spindles and urn-shaped finials flank the entrance, with the north one extended to form a porte cochere. Leaded windows enhance the home. On the north is a beveled and leaded stairway window, while the two-story bay on the south contains an unusual “bottle glass” window. The semicircular fanlights in each of the pediments as well as in the adjacent garage are additional Classical motifs.

The interior of this home is beautifully ornate and original. The staircase is showcased with a double hung leaded glass window and a semi-circular balcony. Mechanical devices original to the house include a speaking tube, doorbell system and corner light system.


This home was designed by Davenport architect Frederick Clausen, who was known for many works in Davenport, including the original Petersen’s store and the Outing Club. He turned over completed plans to Robert and Thekla Wagner on March 16, 1904.

Robert Wagner was the son of George Wagner, who owned Atlantic Brewery in Rock Island. Robert was educated at the University of Iowa and the United States Brewers’ Academy in New York, NY. Upon completion of his studies he became foreman of the brewery, eventually managing the business with his father. In 1892, three local breweries consolidated, and Robert Wagner became the president and guiding force for the Rock Island Brewing Company for the next three decades.

By the close of World War I, and with Prohibition in place, Wagner’s business interests expanded to include banking. In 1924 he became president of both American Trust and Savings Bank and Peoples National Bank.