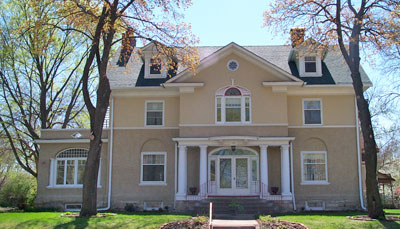 This house was home to one of Rock Island’s most prominent women, Mrs. Minnie E. Potter, President of the J.W. Potter Company. Minnie Potter was widowed at age 32 (husband John was just 36 when he died in 1898), and she was left with three young children and a newspaper to run. Her husband had purchased The Rock Island Argus in 1882, when it had just 500 subscribers. Until the newspaper was sold in 1985, it was owned and operated by the Potter family. Under the tutelage of Minnie Potter, who never remarried, the newspaper prospered. In 1925, she directed architects Cervin & Horn in the construction of a new newspaper plant at 1724 4th Avenue. Mrs. Potter resided here until her death and the property remained in the Potter family until 1983.

In 1907, Rock Island architect George Stauduhar designed this Colonial Revival house, adding stylistic elements of the Prairie School of architecture. The front facade shows Colonial Revival symmetry and door sidelights, with an elliptical fanlight above. Many of the windows are typical of the Prairie style, with a larger sash having a single pane of glass, topped with a smaller upper sash. The Colonial Revival influence is shown in the multiple panes of the upper sashes. The exterior surface is stucco, with rough texture on the lower half of the wall and a smoother texture on top.

The small cottage at 1908 7th Avenue, and the original carriage house are also protected by the landmark designation.