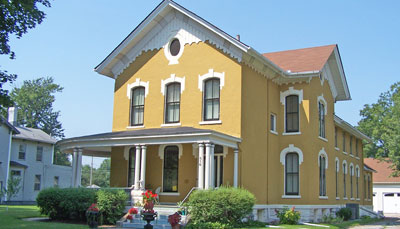 Edward Dennell Sweeney was born in Delaware in 1833. He moved to Rock Island in 1857 to become the principal of the 2nd Ward School. While involved in education, he studied law under the Hon. George W. Pleasants. Sweeney was admitted to the bar in 1860 and shortly thereafter formed a partnership with fellow Rock Island attorney William Jackson. Sweeney practiced law in Rock Island for 50 years and at the time of his death on September 14, 1910, was the oldest and longest sitting member of the Rock Island County Bar Association.


Besides a long and distinguished law career, Sweeney made other contributions to the community, including serving more than 30 years as Director of the Rock Island National Bank, President of the Davenport & Rock Island Ferry Company, President and Founder of the Black Hawk Building & Loan and Savings Association, President and Director of the Banner Coal & Coal Oil Company, and President of the Rock Island Library Board. Sweeney was held in such high esteem that he was invited to deliver the dedicatory address when the cornerstone was laid for the “new” Rock Island County Courthouse on October 1, 1895.


Architecturally, this structure is almost identical to the Hansgen House, located just a few doors to the south. It was designed by Rock Island architect Isaac N. Holmes and built in August and September of 1874. A number of changes have been made over the years. Most obvious is the circa 1898-1906 addition of the wrap around porch. This wonderful front-gable Italianate maintains its tall, narrow, two over two windows, limestone keystones, oval gable windows and limestone foundation.