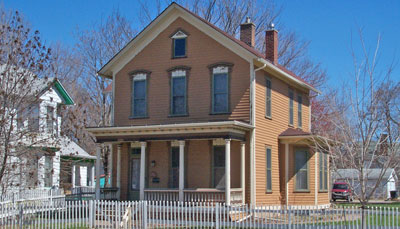 The Charles Fiebig house is Vernacular architecture, which reflects the function, style and materials common to a region. This type of three gabled home, also called a Tri-gabled Ell house plan, became increasingly popular in the mid- to late-1800s during the expansion of the country’s railroads, which made a wide variety of building materials more readily available. The front of the house is decorated with Eastlake window hoods, while the full width front porch is of the Colonial Revival style. The south side of the house has a bay window and side porch with Italianate columns.

Charles Fiebig was a locksmith and an electrician. He owned a well-established locksmith shop at 1619 3rd Avenue, Rock Island. As an electrician, he specialized in bell hanging and burglar alarms. He was born in Germany and came to the United States as a young man. He fought in the Civil War and lived with a tribe of Pawnee Indians for a month.

In addition to being a respected merchant, Fiebig was a colorful local character and his personal happenings frequently dotted the newspapers. He acquired widespread recognition for his ability to open safes that had left other experts in a quandary. Fiebig was often called to cities all over the United States to open safes for various people and reasons.