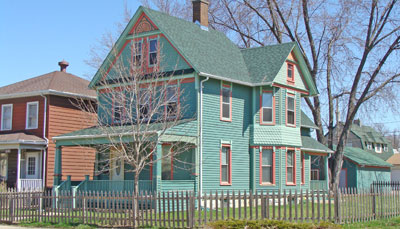 Henry W. Horst was born in Germany on May 3, 1864, where he later apprenticed as a carpenter. He came straight to Davenport to live with an uncle when he was 17. In 1881, he worked for Mathias Schnell's carpenter shop, located in the 1800 block of 4th Avenue, and during winters he traveled south to Tennessee to work. He married Mollie Empke in St. Louis in 1884. For seven years, they lived as pioneers in western Kansas. Henry eventually wrote a book about their adventures. After completing his homestead commitment, he returned to Rock Island, where, after a brief partnership with another contractor named Peterson, Henry started his own business in 1900. Prior to this, he worked nights to complete his home at 1049 17th Street for his growing family. Despite the success he would have, he remained in this modest house until he died in 1949.

Henry and Mollie had eight children, four sons and four daughters. Anton E. attended the University of Illinois, and then followed Henry into the construction business, opening a branch office of Henry W. Horst Company in Philadelphia in 1927. When Henry died, the eastern branch had completed a $3 million subway in Philadelphia, possessed many government contracts, and was serving as contractor for the Walnut Lane Bridge, the first prestressed concrete bridge in America, which spawned the multi-billion dollar precast/prestressed concrete industry. This bridge is listed on the National Register of Historic Places.

Henry T. would be set up in the automobile sales business. The construction company built the Horst & Strieter Ford car dealership showroom in 1911 at the northwest corner of 2nd Avenue and 15th Street, and relocated the construction company office from his home to the second story of this new building. Henry W. Horst served as president of Horst & Strieter for several years before selling his interest to Martin Strieter.

In 1915, Henry would take an overland car trip in a Ford with son Lester, architect Ben Horn and John Roehr. Henry related for the local press a harrowing experience in Colorado with baseball-sized hail, a fragile fabric car top, and broken windshield glass, all backed up with photographs still in existence at the Rock Island County Historic Society Library.

Daughter Minnie married Louis Wendt at a family-only service in the parlor of 1049 17th Street. The couple was married under a green and white arch and the bridal dinner was served in the dining room. Henry T. was the best man and youngest sister Helen was the ring bearer. Tragically, Helen would drown in the Rock River in 1912. As a memorial, her parents presented a wading pool with dressing rooms and fountains in Long View Park. Other children included Carl W., Mrs. Edwin Hilgendorf and Mrs. Henry Witt.

Mollie was born in Moline on October 1, 1864. Little is known about her other than she was active at Immanuel Lutheran Church. She died on September 9, 1927, at the summer home the family had at 1349 36th Avenue, also known as Seven Acres. The family also spent time at Campbell's Island. The funeral service was held in the family residence at 1049 17th Street.

Henry W. Horst & Co. was responsible for the construction and remodeling of many buildings and homes. His was a large operation, capable of building hundreds of homes in six months during World War I or undertaking significant institutional, commercial or warehouse buildings, along with roadways and bridges. Work was not limited to Rock Island, but stretched all across the county. Henry was particularly modest about the church construction he did, charging half of the true cost of the of the contract specifications. In 1943, he told George Wickstrom that he was not a rich man, partly because large contracts required large risk and partly out of his desire to give back to churches and his adopted country. He was a member of the board of directors of the Missouri Synod of Lutheran Churches from 1917 to 1944, where he advised and evaluated all the buildings of the synod. He was one of six men appointed in 1931 by the American Engineering Council and the Associated General Contractors of America to investigate and report on Hoover Dam.

The home is a cross gable Queen Anne with elaborate mixed patterns in the siding. The front gable has a sunburst in the peak and several different shingle patterns, including round, square and diamond. Round shingles are also present on the two story bay on the south side of the house. Note the intricate detailing around the front second story windows. Window hoods all over the house also show evidence of carpentry skills. The porch is probably original, but the columns are not. The home was part of the Broadway Historic District's Great Unveiling program in 2001, when aluminum siding was removed to reveal the beautiful carpentry hand-crafted by Henry W. Horst himself.