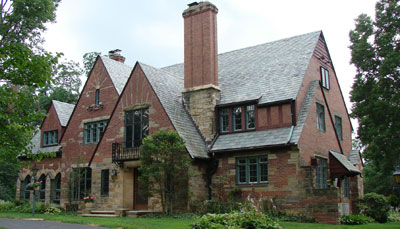 
Martin and Marie Strieter built this house in 1931, during the hey-day of Horst & Strieter Motors. After graduating from the University of Nebraska, Martin's first job was on Arsenal Island, but only a year later his friend Henry W. Horst, a prominent Rock Island building contractor, asked him to go into the motor car business with his son, Henry T. Horst. It was 1912 and Horst & Strieter pioneered Model T Ford automobile sales for the Quad Cities region. Strieter started in the business as secretary-treasurer, becoming president in 1930. He developed a personal relationship with Henry Ford, traveling often to Detroit and visiting at Ford's famous Fair Lane estate. For a time, Martin operated a Model T assembly plant across the river in Rockingham before Henry Ford's own famous assembly lines were created. Martin, along with many of the other salesmen, even loaned Ford a significant amount of money at one point to help the company through a rough patch. Horst & Strieter became one of the largest automobile dealers in the Midwest with over 100 salesmen at one point. The Horst-constructed, $25,000 Rock Island dealership building was at 2nd Avenue and 15th Street, where the west ramp for Centennial Bridge is now located.

In civic life, Martin Strieter was as prominent as his cutting-edge business. He served on the board of directors, often as president, for an impressive number of charities and community organizations, including Boy Scouts, Young Men's Christian Association (YMCA), Rock Island Chamber of Commerce, Rock Island Welfare Association and the Missouri Synod of Lutheran Churches, for which he served as treasurer. Martin was also credited by International Harvester Board Chairman H. Fowler McCormick for bringing the Farmall Works to Rock Island in 1926. This factory was built solely to produce the new Farmall tractor, and by 1930, the 100,000th Farmall was produced. The Rock Island Farmall Works would become a major employer in the Quad Cities region, with 5,000 employees at the peak of production. After selling the car dealership in 1946, Martin became more heavily involved in banking, not retiring as chairman of the board of directors for Rock Island Bank and Trust until 1973.

Martin passed ownership of the home to his son, John, who has been a land developer and a businessman. One of his largest projects was the 1960 Hill Gate housing development in East Moline, which contained 72 homes, 24 apartments in six buildings and a church. Other projects included Heritage in Moline, Windmill Farm and Radcliff in Milan and Marquette Village, Camden Park and Kimberly Village in Davenport. Kimberly Village was the first Planned Unit Development (PUD) approved in the State of Iowa. He also optioned the site for North Park Mall, and his designs for the shopping center were eventually implemented by the developers. In Rock Island, John developed Oak Hills and Heather Hills, along with the Strieter Corporation building, which is where he runs his business today. John married Gloria Rupprecht, who was Miss Indiana in 1957.

The home was inspired by architecture Martin saw during his travels to Detroit. After pointing out some of his favorites, in the Tudor Revival style, an associate connected him to the architect who designed the Detroit homes. Ben Horn was hired to oversee the Rock Island operations, however. Schindler was the contractor. The drawings were so detailed that even the location of specific stones in the facade were drawn on the elevation plans. It was the first home in Rock Island to have forced air and natural gas heating, which later made the installation of air conditioning much easier. The other lots in the immediate vicinity in Hill Crest had access from 12th Street, but topographic challenges meant access would be from 14th Street for the Strieter House. When the foundation work began, 14th Street was a dirt road, but was paved by the time the house was finished. The Strieter family still has old black and white movies from the house's groundbreaking.


The landscape around the house is very wooded, and at times the stately house is almost invisible from the road. "Mr. [John] Hauberg told Dad that we still have the remains of the trail Chief Black Hawk would travel to where his campsite was located along the river bend," said John Strieter in 2009. “The path is a little dished out spot. You can still see it right in the front yard. They [the Native Americans] used to drag poles for loads, which made the indentations.” There was not a designed landscape created for the Strieter House, but Martin hired William Guegler full time to take care of the grounds. Guegler planted bushes throughout the woods so there would be growth beneath the canopy.


The house is three stories tall with a very steep gable end roof covered with slate. There are multiple gables on the front facade, along with a massive chimney with patterned brick and stone. The front entrance is surrounded with stone and has a small iron balcony above the door. The original casement windows are still in place. The home has a high degree of integrity, with changes limited to the glass enclosure of an originally screened porch. Much of the fenestration consists of a triple set of windows. The plan of the house is irregular, emphasized by the deceptively random placement of the limestone.