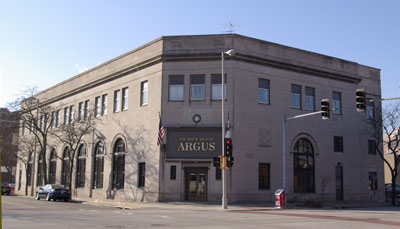 Designed in 1925 by Benj. A. Horn, Cervin & Horn Architects, the Argus Building is a large rectangular, two and three story stone faced, Art Deco styled edifice with a flat roof and an angled northeast corner. The main (long) facade has seven massive window openings with circular arched heads at the first floor level. These windows, along with others in the building, have been retrofitted with contemporary metal sash. At the south end of the first level is a doorway with a bas relief panel above it that includes a decorative urn motif with the dates 1851-1924. Above the doorway and openings is a classically styled cornice, above which is emblazoned the name of the newspaper, The Rock Island Argus.

The newspaper began in 1851 as the Rock Island Republican when Rock Island was a small but growing community of 1,960. In 1855, publisher J.B. Danforth, a Democrat, changed its name to The Argus when the Republican Party replaced the Whig Party as the other major political party. It was named after a character in Greek mythology which had many eyes and was ever watchful. In 1882, The Argus was purchased by John W. Potter, and from then until the paper was sold in 1985, it was owned and operated by the Potter family.

Under the tutelage of Mrs. Minnie Potter, who became president of the paper after her husband, John Potter, Jr. died in 1898, the paper prospered. In 1925, Mrs. Minnie Potter instructed architects, Cervin & Horn of Rock Island, to construct a building that the “community could view with continuous pride.” Some of the more notable buildings of Horn and the architectural partnerships he was associated with include: Argus Building, Augustana Book Concern, Weishar Apartments, Rock Island Masonic Temple, Fort Armstrong Theatre, Augustana College Gymnasium, National Guard Armory, Rock Island High School, Illinois Oil Products Building, and Grant School. Mr. Horn was a graduate of Columbia College, New York and the University of Illinois. He began working with Olof Cervin in 1918, and later separated to form his own firm in the 1930s.

One of the most important features of the exterior of the building was the bulletin board in the days before radio and television. It was placed over the entrance at a 45-degree angle. To operate the bulletin board, someone had to climb through the trap door in the newsroom into a pit. Here the operator could post latest news, including the scoreboard of the World Series. Operators watched the Western Union ticker and then moved the ball around the field and the players around the bases on the scoreboard. It was not unusual for hundreds and sometimes thousands of spectators to stand outside and watch the scoreboard during the entire game. A projection machine was also sometimes used to project bulletins on a transparent screen located directly behind the plate glass. After the emergence of television in the 1940s, the paper no longer used the scoreboard and eventually stopped using the window for bulletins. In 1992, the window was removed and replaced by a large bronze sign that identified the building as the home of The Rock Island Argus.

Upon purchase of The Argus in 1986, the Moline Dispatch Publishing Co. went to great expense to clean and repair the building and its unique fixtures and architecture. Some mechanicals were updated and the first floor lobby area returned to its original splendor and opulence.

For many years the news operation of both The Argus and its sister papers, The Dispatch and The Leader and several niche publications, were run out of the Rock Island building. The papers moved news operations out of the building in 2008. In later years the company provided office and storage space to several nonprofit community organizations including Rock Island Clean & Beautiful, Colonel Davenport House, Quad City Music Guild Costume Shoppe and the Rock Island Grand Prix, not to mention thousands of square feet of storage for materials used for District events.