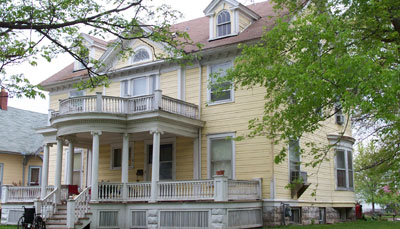 
Half round porch, spiderweb window and pilasters make this one of the best Colonial Revival houses in the city.

This home, built circa 1901 by Henry W. Horst Company, is one of the most outstanding Colonial Revival specimens in Rock Island. While maintaining the traditional aspects of the style, such as prominent triangular pediments, the Palladian window, sidelights and symmetry, special features bring the architectural impact of this home to an even higher level. The siding pattern is unique and not duplicated on another Broadway property. The dormer windows feature keystones, arched glass and returns. The central pediment has an unusual and intact “spider web” window. Elaborately used pilasters, modillions and dentils frame windows and cornices. Finally, the half-round porch with its Ionic columns and intricately turned balusters is an accurate restoration that was nearly lost forever.

Beginning in 1891, several families called this address home, but the original house was replaced about 10 years later, maybe due to a fire. The original owners of the present house were K.T. and Netta Anderson. Knute Theodore Anderson, always known as “K.T.”, was a banker at the State Bank of Rock Island. He was also City Clerk from 1899-1901.

Barrier-breaking Netta had vital ties to Augustana College all of her life. She was the daughter of Dr. E.F. Bartholomew, a well-known English professor. She graduated from Augustana in 1894, one of three women in a class of 17. She overcame obstacles to become the first woman admitted to the Adelphic Society and entered the school’s first oratorical contest. She then married K.T., also an Augustana student. Netta helped to organize and then became the first president of the Augustana Alumni Association. She then joined the college’s Board of Directors from 1930 to 1948. She also served many community organizations in a leadership capacity: Bethany Home, American Red Cross, Royal Neighbors of America, Rock Island Woman’s Club and the Illinois State Historical Society.