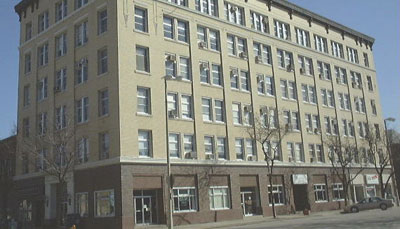 
First use of reinforced concrete construction


Local architect Olof Z. Cervin, also an eventual owner, completed oversight of the Safety Building in 1908. Mr. Cervin said this was the first time reinforced concrete was used for construction in the Quad Cities. Builders Henry W. Horst & Co. used concrete for floors, ceilings, roof, and supporting columns. As a result, Sanborn Fire Insurance Maps noted the building as fireproof. It is 60 by 150 feet, contains six stories and cost about $150,000 to construct. Cervin had his office in the Safety Building until the mid-1940s, when he retired. SGGM Architects and Designers, the successor to Cervin's firm, is still located in the Safety Building. The building opened on May 26, 1908.


Another financial partner in the venture was Levi S. McCabe, of McCabe’s Department Store. Mr. McCabe wanted to enlarge the business district that was located primarily on 2nd Avenue. His investment in the Safety Building was intended to promote that expansion. The third original owner was the Rock Island Safety Deposit Company, who gave the building its name. Cervin sold his interests to McCabe heirs in 1923. The building remained under their control until 1975, when it was sold to a group of local businessmen.


At the time of its construction, the building was the tallest in Rock Island. A careful look at the design reveals three distinct horizontal divisions separated by cast stone bands. Such a division of structure was becoming increasingly common in Chicago skyscrapers during this time. If we imagine the entire building represents a Greek or Roman column, the divisions are immediately apparent as representing the base, the shaft, and the capital (or top). In the Safety Building, the first story base is dark brick. The classically inspired entrance on the north is trimmed with shell-like carvings called anthemions. The middle portion is four more stories high, with buff colored brick and aligned windows accentuating the vertical rise. Near the upper corners the bricks are laid so as to create an arrow-like relief. The arrows continue into the top story or capital, which is nicely finished with a bracketed cornice punctuated by recently restored electric lights. Since these cornice lights are unique downtown, it is easy to speculate a connection between their use and occupancy of the building by People’s Power Company, who sold electricity.