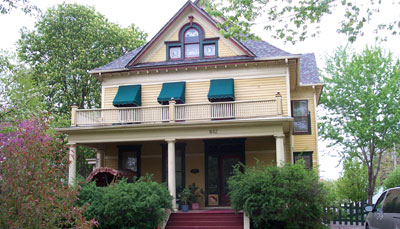 
German immigrant Leopold Simon was already a successful wholesaler when he and his wife Rebecca built this house in 1890. Over the years he was partners with brother-in-law Alphons Mosenfelder and Moritz Landauer, and eventually specialized in men’s clothing.


Around 1910 the house was sold to the co-founder of Young & McCombs Department Store, William Sharp McCombs. Twenty years earlier William had married Ida Tremann; they had one son and one daughter. McCombs bought this house about the same time he reorganized and expanded his business with new partner Louis P. Best. Together the three partners operated a 66,000 square foot, six-story retail operation with 75 departments. The new business was located in the Best Building at 17th Street and 2nd Avenue. In 1920, Young & McCombs merged with chief competitor McCabe & Co., causing the “largest transaction in the history of Rock Island mercantile business.” Three years later, William McCombs suffered a stroke of apoplexy and died. He was 61 years old. The home was converted into a duplex in 1931. Ida continued to live on the main level, while her son William and his wife lived upstairs. The McCombs family owned the home until 1969. Today the house is again a single-family home.


This home, like many of the others in the Broadway District, is a Queen Anne built in the free classic style. Notice the Tuscan columns, modillions and square balusters. The grand second-story Palladian window and the scalloped shingles surrounding it have been beautifully preserved. Take a peek even further up and you can see another gable with a pointed window with elaborate muntin divisions.