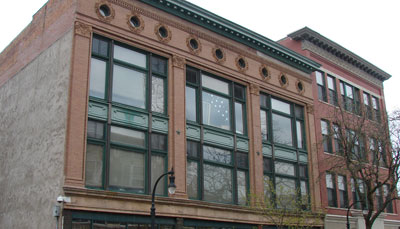 
Early bank and department store with high degree of integrity.

This building was historically constructed as two separate and distinct buildings, the Peoples National Bank and the Fries Building. They have now been connected on the first, second and third stories. The Bank building is the four-story brick portion, while the Fries Building is three stories with the round windows at top. A tripartite division of base, center and cornice horizontally divides the exterior of both buildings. Special architectural features include the massive cornices, Commercial style windows and the decorative frieze with round windows on the Fries Building.

The Fries Building was built in 1897 and designed by Drack & Kerns.

Frank G. Young and William Sharp McCombs commissioned the Fries Building after they had outgrown a previous site at the same location. The new store opened in 1897 to much fanfare. The new building had 22,400 square feet, frontage on 2nd Avenue of 60 feet and electrical lights around the display windows. The prosperous Young & McCombs Department Store moved west to the Best Building in 1909. Various retailers continued to occupy the Fries Building, including Mosenfelder & Kohn’s shoe store, Hadley Company furniture, Bennison’s Department Store and the New York Store.