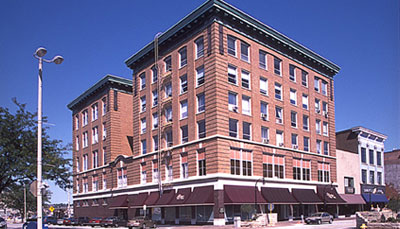 
An elegant representation of an early 20th century department store with modern amenities.

The architectural firm of Clausen & Clausen designed the Best Building in 1908 for industrialist and real estate magnate Louis P. Best of Davenport. Best was a financier of Young & McCombs Cooperative store, which moved from its previous location at 1723-27 2nd Avenue. The building replaced two buildings from the 1850’s known as “Charles Buford’s Brick Block” which included the Buford Building and the Gothic Building. When the Best Building was first constructed, it was the tallest building in the immediate vicinity and one of the earliest Rock Island buildings constructed of reinforced concrete. Special characteristics included an elevator and an early form of air conditioning from a 10-ton ice machine located in the basement. Best was particularly interested in fireproof construction and this building contained the latest technologies to prevent and contain fires, including specific construction methods and sprinkler systems. Originally, an elegant glassed roof portico hung over the 2nd Avenue entrance, and flagpoles lined the roof edge. Despite its great height, the building was designed to be sympathetic to the surrounding buildings. Note the gentle arches that frame pairs of windows and which echo the curved tops of many of the windows originally present on the block.

Young & McCombs Department Store existed in this location until the 1920s, and was succeeded by Brady-Waxenberg's Department Stores and Montgomery Ward in the 1930s. More recently, it has held offices.

This new and modern store was reported to be the first outside Chicago to be equipped with a pneumatic tube system for cash transactions. When a purchase was made, the cash was put in a carrier that traveled through brass tubes to the business office. In less than a minute the carrier would return through the tube with the correct change and a receipt.