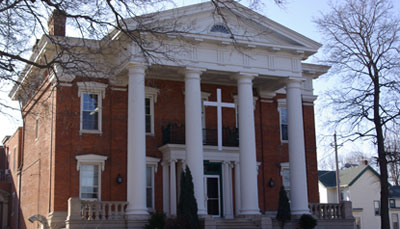 Wealthy plantation owner Charles Buford built this stunning home with an unobstructed view of the Mississippi River in 1854 when he moved to Rock Island from Kentucky. A series of important people owned this equally important architectural treasure.

Closely designed after an antebellum plantation house, a Greek Revival home such as this is rare in northwestern Illinois. The house exhibits all the major features of Greek Revival style. In this example, the front porch has massive brick columns the full height of the house surmounted by a pedimented gable with a fanlight and heavy cornice. The area under the cornice is ornamented with vertical lines in groups of three called “triglyphs” in Greek architecture. The front corners of the building form pilasters to augment the Greek temple effect. All of the original windows have six-over-six panes, with cut stone lintels and sills or heavy pedimented wooden lintels. The front vestibule has paired Ionic columns and dentil molding. The walls of this massive home are solid brick and nearly 20 inches thick. This expensive home was said to be as elegant on the inside as the outside. It contained “all the modern conveniences of the day,” and was “worth every penny of its $10,000 construction cost.”

Kentucky aristocrats Charles and Lucy Buford and their ten children moved north to Rock Island and into this house in 1854. Charles was a Yale University graduate who farmed and raised thoroughbred horses in Kentucky. Once here, Charles founded the Buford & Tate Plow Company, which later became the Rock Island Plow Company. He was also a capitalist for the Coal Valley Mining Company. Lucy lived here for decades after her husband’s death, until she passed away in 1895.

In the next 20 years, two more significant people lived in the mansion: Levi S. McCabe and Elmore Hurst. McCabe was Rock Island’s mercantile magnate as the 20th century dawned. As the owner of McCabe & Co., shareholder of Tri-City Railway, owner and promoter of Moline’s Prospect Park, director of Central Trust & Savings Bank, president of the Rock Island Safety Deposit Company, developer of the Safety Building and owner of a vast amount of downtown Rock Island, McCabe and his wife Marian could well afford to live in the Buford Mansion. Attorney and avid Democrat Elmore Hurst and wife Harriet also lived here later in their life. Repeatedly, Hurst was asked to run for state and national office, including governor of Illinois and vice-president of the United States, but he declined all offers.