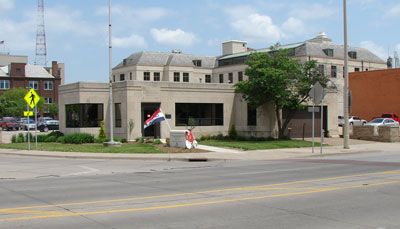 The Centennial Bridge Commission Building was built in the Art Moderne style, which is characterized by clean, angular lines, ornament that is integral to the structure, light color and light chrome or aluminum metals. The Centennial Bridge Commission Building is the smallest of the city’s Art Moderne structures and retains a high degree of architectural integrity.

The Centennial Bridge Commission Building is associated with construction of the Centennial Bridge and former Rock Island Mayor Robert P. Galbraith. Centennial Bridge was the first four-lane span to cross the Mississippi River. It resulted solely from the efforts of the City of Rock Island (and mainly Mayor Galbraith) and was entirely financed with private capital through the use of revenue bonds. The bridge opened in 1940 to great fanfare, with a parade and street party.

Mayor Robert P. Galbraith was elected for the first time in 1937, and one of the major planks in his platform was to build a better means of transportation between Rock Island and Davenport. After much travel and research, Mayor Galbraith was able to present a complete program of financing using the relatively new system of selling revenue bonds for bridge construction. During his first term of office (1937-40), Galbraith was credited for $8 million in public improvements, including sewer expansion, waterworks expansion, street improvements, government-sponsored housing and the bridge. Galbraith also pioneered the local appreciation for modernistic architecture. He built the Art Moderne Galbraith Motor Company building at 1401 4th Avenue and his administration sponsored the construction of Rock Island City Hall, the Rock Island Sewage Treatment Plant at 1299 Mill Street and the Centennial Bridge Commission Building.

The Centennial Bridge and its associated commission building were designed by the engineering firm of (Ash), Howard, Needles, Tammen and Bergendoff. Today the engineering firm is known as HNTB and it is a firm that has significantly influenced the local, national, and even international, landscape. HNTB traces its roots back to 1886 and Kansas City. In 1940, HNTB had offices in both New York City and Kansas City, and was involved in the simultaneous erection of two other bridges across the Mississippi - one at Natchez and the other at Greenville, Mississippi. The firm specialized in bridge construction and, by 1940, had engaged in projects in more than half the states as well as several foreign countries.

Local contractor Sam Weisman built the Centennial Bridge Commission Building in 1941. Weisman came to the United States from Germany at a young age and worked as a carpenter on the East Coast while he learned the language. In 1912 he came to Rock Island, worked for other contractors and started his own business just six months later. He was responsible for many significant Rock Island structures, including the 1927 Longview Apartments, the 1948 Weisman (now Villa) Apartments, and many outstanding brick bungalows, such as those found in Weisman’s Addition.

The building was converted to the Centennial Bridge Visitor Center in 2008 with the assistance of a Preserve America grant. In addition to tourism information, the space hosts an outstanding series of displays and other memorabilia related to Quad Cities area bridges and the Centennial Bridge in particular.