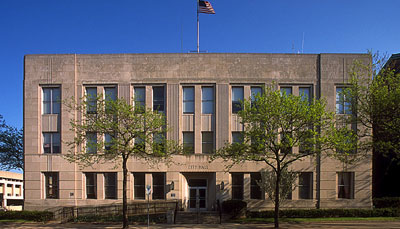 Designed in 1938 by Cervin & Stuhr and constructed in 1940, Rock Island’s City Hall is a fine example of the Art Deco style. The stone-faced building includes vertical fluting on the main entry, spandrels between the second and third story windows, columns separating the window bays, and circular moldings over the front doorway. Above the doorway, incised in stone blocks with a scalloped bottom edge, is the name CITY HALL. On each side of the main doorway are five original, aluminum framed, double-hung windows. The 16th Street side of the three-story section has three window bays with paired aluminum framed double-hung windows at each level, recessed slightly between columns flush with the wall plane.

The vestibule and lobby of City Hall are designed in a manner typical of the 1940s. Walls of the vestibule are covered in a deep green marble, which is also used for the baseboards in the lobby. The Art Deco theme is apparent in the curving walls and the “rift sawn” oak paneling. A beautiful terrazzo floor in the center of the lobby features a large multi-colored (black, yellow, and red) star-shaped design.

On March 22, 1941, Olof Z. Cervin, principal in the design firm, had this to say about the new building on the occasion of Rock Island's centennial: ".....City Hall expresses the desire of today, to show restraint, straight-forward, unadorned surfaces on the outside, but let the interior be a full expression of an age that prides itself in efficiency."

The rear wing of City Hall, a two-story light brick faced building, houses the Police Department. The slightly projecting entry bay displays distinctive Art Deco features including a metal-framed door with two glass panes and a molded cut stone surround. Above the doorway’s metal canopy is a vertical stone section containing a strip of glass blocks. The stonework above the glass blocks is fluted.

Deciding on a New City Hall

Plans were in the works for many years to construct a new City Hall. There had been an active movement to replace the 1880s Second Empire city hall, which had a stucco exterior, with a new, modern facility. The old city hall was razed between October and December of 1939. Newspaper accounts of the demolition stated: “None mourn its passing: No tears were shed.” Completion of this city hall was accomplished under the administration of Mayor Robert P. Galbraith at a cost of $275,000.