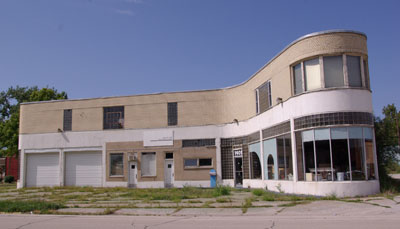 
Truly unique interpretation of Art Moderne building design and association with one of Rock Island's most important mayors, Robert Galbraith.

This modernistic former car dealership building was built in 1940. At that time it was the Galbraith Motor Company, and also included a gasoline service station. The one and two story building complex has several parts, including the one and two level auto repair/paint shop area in the rear that provided for a 65-car display area on the roof between the front two story section of the building and the rear two story wing.

The streamlined Art Moderne design elements are all displayed on the uniquely shaped, buff brick front wing. Viewed from 4th Avenue, the facade is curved on its west end, runs about 40 feet to the east and then curves again, forming an obtuse angle. This wall extends near 4th Avenue, where it curves again around the former show room space. There have been alterations to the lower part of the front section of the building, including new metal overhead doors and new metal framed doors and show windows. The most intact parts of the original design include the most unusual curvilinear shape of the front part of the complex, as well as the upper level fenestration.

When Robert P. Galbraith built his flagship automobile dealership building, he was one of the most important men in the community. As the mayor of Rock Island from 1937 to 1945, he was responsible for the most progressive public investments ever made in the city. At the same time he was constructing the modernistic Galbraith Motor Company at 1401 4th Avenue, he also oversaw construction of Centennial Bridge, the accompanying Centennial Bridge Commission Building, the new City Hall, a municipal sewage system and disposal plant, municipal waterworks improvements, 200 blocks of street paving, and two housing projects, which included the 305-unit Arsenal Courts, now known as Century Woods, which was built to house the pre-World War II influx of workers at the Rock Island Arsenal.

Galbraith’s interest in automobiles began in 1912 when, at 22 years old, he started a used car business called Tri-City Auto Exchange. He is believed to be one of the first men to make a specialty of selling used cars as well as new ones. He acquired his first new car agency, the Halliday, in 1915, and finally incorporated the Galbraith Motor Company in 1927. He was responsible for the construction of three car sales buildings and garages in the city. His company was located at 1500 4th Avenue just prior to building the structure at 1401 4th Avenue. He sold his Buick and GMC business in 1942, and devoted his time to public life. Mr. Galbraith died on October 31, 1946 at age 56, after several years of illness with heart disease.

The Buick dealership was purchased by Kinney Buick, Incorporated, in 1942, but sold to Buck Buick Company by 1945. Howard P. “Cub” Buck owned the business until the late 1960s. He was a member of the Green Bay Packers professional football team from 1921 to 1926 as an outstanding member of both the offense and defense. He started his own automobile dealership in 1928 in Rock Island after playing and coaching football for seven years. “Cub” Buck was elected to the Wisconsin Sports Hall of Fame in 1956. This building was last used as a car dealership in 1991 as Austin Buick.