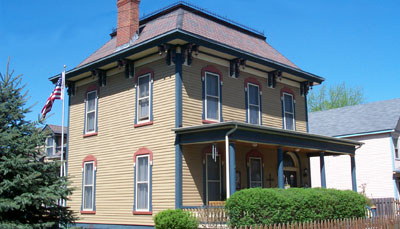 Beardsley in the Civil War

The Major James M. Beardsley House is named for a Rock Islander who earned his title in the Civil War. Beardsley, a deputy County Clerk, helped organize Company D of the 13th Volunteers in 1861, initially signing up for three-years of service.

He returned to Rock Island after seeing action at battles of Lookout Mountain, Chickasaw Bayou, Vicksburg and Ringgold Gap. In 1869, he and his wife, Lurany, purchased a large lot fronting on both 22nd and 23rd streets from pioneer settler Samuel Bowles. The lot probably held a house, because a year later it was reported that Beardsley had exchanged his Broadway (as 23rd Street was then called) home with Joseph Conet, his father-in-law, for 800 acres of Iowa land. He also sold smaller portions of the Broadway land to others.

In 1871, he built a “new” residence here, which is likely the front, most visible, part of this home. Only three years later he sold to Alvin Hull, whose family remained here for the next 20 years. Beardsley, who became an attorney, would move frequently over his remaining years.

Henry Peter Bosse was an Army Corps of Engineers mapmaker and photographer who documented the Upper Mississippi River valley before the installation of the lock and dam system. His images and work were rediscovered in the 1990s and the collection is valued at $2 million. When Bosse first began photographing his famous Views on the Mississippi albums, he boarded at the Rock Island House (1882-85) and then the landmarked Spencer House at 705 20th Street (1885-88). By the time his images were on display at the Columbian Exposition, he resided here. He would remain at 536 23rd Street until his marriage in 1895, at which time he moved to 2912 7th Avenue.

The main house is a high styled Italianate, while the rear wing is a simple 1 ½ story cottage. The original back part is believed to have been built about 1860. In the 1980s, it was severely damaged by a fire and ultimately removed. During a major renovation and restoration in 1998, Rock Island architect Jeff Dismer designed a new addition that evokes the design and massing of the original wing. That addition is now the newest rather than the oldest part of the house.

The historic Italianate front has a steeply pitched hipped roof topped by a flat area with iron cresting. Other details include a traditional box shape, decorative window hoods, beautiful paired brackets complete with hanging pendants, and a magnificent double door topped by a semicircular transom. The wide, front porch dates from the early 1900s. Large porches were a popular addition to Italianate homes, which usually had much smaller porches or stoops.