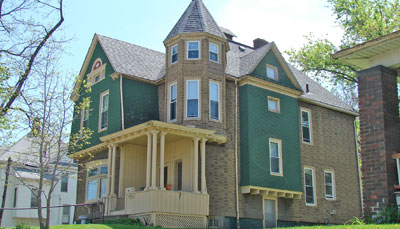 
Last home of Henry Peter Bosse, whose maps and photos documented the Upper Mississippi River before the locks and dams were installed.

Henry Peter Bosse was an Army Corps of Engineers mapmaker and photographer who documented the Upper Mississippi River valley before the installation of the lock and dam system. His images and work were rediscovered in the 1990s and the collection is valued at $2 million.

He was born in 1844 in Prussia. After a stop in Chicago, he was employed by the Rock Island District Army Corps of Engineers by the 1880s as a draftsman and cartographer. Between 1883 and 1891 he took the photographs of the upper river valley that made him famous. Bosse published the large format Views on the Mississippi River between Minneapolis, Minn. and St. Louis, Mo. 1883-1891 as bound albums of meticulous, blue cyanotypes. Shortly afterward, Bosse's album views were shown at the World Columbian Exposition of 1893 in Chicago, a turning point in photographic history. Bosse's photography assisted with his creation of the most accurate map yet made of the upper Mississippi which, in turn, facilitated the engineering of bridges, locks and levees. Several variants of his drawn maps exist, while his album of photographs may have been the first photographic map of a major river ever created.

Since Bosse's major album surfaced at a Sotheby's auction in 1990, his cyanotype photographs have been included in the permanent collections at the J. Paul Getty Museum in Los Angeles, the San Francisco Museum of Modern Art in California, the New York Metropolitan Museum of Art, the Amon Carter Museum of Art in Texas, the Nelson-Atkins Museum of Art in Kansas City, Missouri, the Minneapolis Institute of Arts in Minnesota, and the National Museum of American Art at the Smithsonian in Washington, D.C. The United States Army Corp of Engineers at Rock Island and St. Paul also have various Bosse photographs and ephemera. His 300 images include long-vanished vistas of bluffs and coulees, rapidly growing cities, workboats pulling snags out of the new channels, rock quarries, dredging operations and construction of wing dams and bridges. These images depicting the history of the Mississippi River comprise a rich essay on the evolution of one of the world's greatest rivers and have distinguished Bosse as one of the foremost landscape photographers of the late 19th century.

When Bosse first began photographing his famous Views on the Mississippi albums, he boarded at the Rock Island House (1882-85) and then the landmarked Spencer House at 705 20th Street (1885-88). By the time his images were on display at the Columbian Exposition, he resided at 536 23rd Street, which is another Rock Island Landmark called the Beardsley House. He would remain there until his marriage.

Henry Bosse married Hulde Thiele in 1895, when the groom was 51 years old and the bride was 38. By 1899, the draftsman/photographer and his wife had purchased 2912 7th Avenue, which had room for their live-in maid. A carriage house accommodated Bosse's horse and phaeton. He died in 1903.

The house was probably built around 1896 and the first residents were Charles C. and Mary Pratt and their son Charles, Jr. Pratt was an engineer for the Chicago, Rock Island & Pacific Railroad. Next residents were the Bosses. By 1905 the home was owned by Dr. Frank X. and Elise Bickel. Bickel was a dentist and would own the home for more than ten years.

The house is a Queen Anne with a gambrel roof and interesting curves and turret. While the porch has been altered and the clapboard has been covered, many elaborate details survive. Be sure to check out the etched glass "B" in the front door. Is it for Bosse or Bickel?