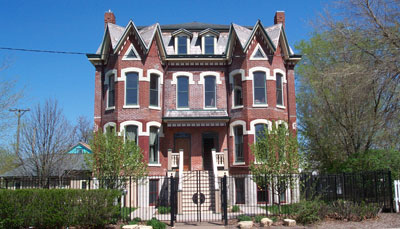 Anastasia (Ciolina) Murphy, though married, held title to this house in her own name. She married Michael Joseph Murphy in 1874, when she was 27 years old. He dealt in pianos and she taught music. They moved into the 2207 portion of the house around 1882, after renting it to others for some years . According to her 1921 obituary, she was “one of the best known women in this community” and “gifted with considerable talent as artist, pianist and vocalist.” Besides her music, she was well known for her painting. The Murphys’ daughter, Naomi, lived in this house with her husband until 1984.

The Murphy House was originally constructed as a double house by Mrs. Murphy. It is believed architect Isaac N. Holmes designed the building because Mrs. Murphy used him in other contemporary projects. He also designed the Sweeney House and the Star Block, also Rock Island Landmarks.

It was speculated in the landmark nomination that Jerman S. Keater might have been the builder. Keater, along with his wife Sarah, owned and subdivided this property and those surrounding. Keater was one of the best known pioneer lumbermen of the Midwest, and owned a substantial lumber operation. At one point his lumber holdings in Wisconsin exceeded 30,000 acres. In 1869, he built a lumber mill in Rock Island under the name Keater & Co. , which later combined with Annewalt & Denkmann and then became the Rock Island Lumber Company, which Keater served as a director. His mills suffered devastating fires in 1870 and 1883, at which time he lost a considerable portion of his fortune. Keator lived in Moline, was a city officer, and started many businesses there.

Second Empire style homes in Rock Island are very rare, and this house is second only to the Weyerhaeuser House for architectural lavishness. The patterned cedar shingle roof has been restored, along with the cornice and the unusual triangle windows in the mansard roof. The porch has also been restored, replacing a Colonial Revival style, full facade porch that appeared on house around 1906. The porch restoration has once again highlighted the wonderful, raised, English-style basement. A new, eight-stall carriage house has been erected at the north end of the property.

Although vacant and deeply neglected from the 1980s until 2005, this unique edifice has been reborn as loft housing.