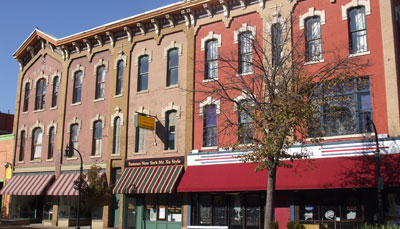 
The Star Block was built in downtown Rock Island in 1874 from plans designed by architect Isaac N. Holmes. Although these are three separate buildings with three separate owners, it is obvious they were planned to appear as a single entity.

The block featured cast iron storefronts, which were very popular at the time. The buildings are of varying lengths in the back, but the first floors of all the buildings featured retail, with the upper floors used as office and residential. The common facades of the buildings were once six segments long; the westernmost segment has been demolished. All are under a common cornice with large brackets. Decorative surrounds embellish windows. Iron balconies at the second level were removed before the turn of the century.

The three-dimensional star in the peak and the painted word “BLOCK” are original. The eastern storefronts are very old, if not original, and feature two styles of leaded prism glass in the transoms.


At the time the building was designated a landmark, several storefronts were covered with unsympathetic materials and the corner storefront was completely boarded. This handsome building has been restored to its former glory.