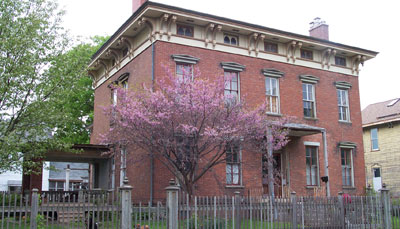 
Early Italianate significant for the attic-level windows and overall integrity.

Samuel S. Guyer was born in 1814 in Pennsylvania, arriving in Peoria, Illinois in 1839, accompanied by his mother and sisters. He began the study of law there. With his brother, he eventually traveled to Rock Island, in possession of only $7.00. In 1847, he was elected sheriff of Rock Island County. That same year he married Annette Holmes, the daughter of Judge George Holmes from Port Byron. Guyer served his second term as sheriff in 1849, and then turned his interest to mining development. He was one of the original owners of the Coal Valley Mining Company and the Rock Island & Peoria Railroad, along with N.B. Buford, Holmes Hakes, Charles Buford, Ben Harper, John W. Spencer and James Johnston. He and his partners sold their railroad shares in 1861, and he became associated with Hakes, Guyer & Company, which built the Rock Island Paper Mill. He was also associated with the founding of Chippiannock Cemetery in 1855, serving as vice-president of the cemetery association. When Probate Court Judge John Wilson passed away in 1871, Guyer was appointed to fill the term. He was elected in 1873 to serve a full four-year term. S.S. Guyer died in 1883. Annette died in 1900.

Ownership of the home passed to daughter Annette, or Nettie as she was more commonly called, in 1901. Nettie was born in 1857. She moved in the highest social circles in Rock Island, and was friends with Lizzie Weyerhaeuser, the Webber girl (granddaughter of John Deere) and the Mitchell daughter. Nettie Guyer married James R. Kimball in 1888, and they lived here until the 1940s, after which the house was divided into apartments, with as many as nine listed in city directories. Nettie and James did not have children. In 1911, Nettie was associated with a suffrage rally.

The Guyers also had a son, Edward Holmes Guyer, born in 1853. He married Constance Mary Kimball. Edward's wife and Annette's husband were brother and sister. Edward was an attorney who followed his father onto the Chippiannock Cemetery board of directors and became a land developer, perhaps most well known for platting the KeyStone neighborhood and establishing Silvis.

The Italianate house has a low-pitched roof, widely overhanging eaves with paired brackets and small decorative attic windows. The first and second story windows are tall and narrow and crowned with pediments. The home shows its early age with the small panes of glass visible in the four over four windows. The double front doors with transoms are also typical of Italianate homes. The end chimneys have been restored