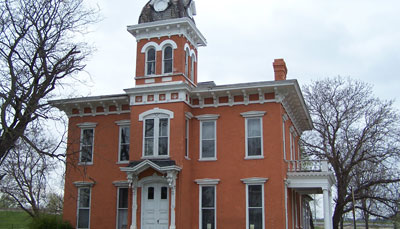 The house was built about 1857, presumably for occupancy by Philemon Mitchell, who had grown to wealth and prominence in the early financial and manufacturing circles of Rock Island. History relates that Philemon Mitchell and his partner, Philander Cable, arrived in Rock Island in 1856 with $80,000 in cash guarded by a shotgun between them on a train from Louisville, Kentucky. They came to Rock Island to purchase a local banking house. During the panic of 1857, instead of failing, they prospered, and eventually formed a successful banking enterprise.

The grand home of Philemon Libby Mitchell is distinctive for its Italianate architecture and prominent tower, which is covered with multi-shaped slate shingles. Few know that the home was originally built without the tower, which was added sometime between 1867 and 1886. The brick walls, decorative brackets and narrow windows are also wonderful features. The brick from this home came from Rock Island’s own Atkinson Brickyard.

The property went through few owners after the Mitchells. By 1961, the house was purchased by prominent African-American couple George and Alysine Nicholson for the purpose of a funeral home. The distinctive carriage house was moved when the Centennial Expressway was constructed and attached to the rear of the home. The carriage house addition was demolished in 2011. The house is now in the process of restoration by descendants of the Nicholsons.