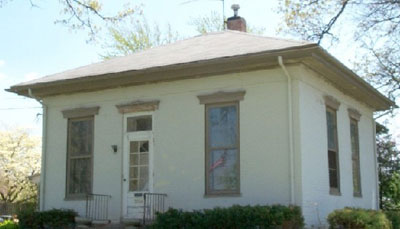 Christopher Atkinson, who owned a brick manufacturing company in Rock Island during the mid-1850s, built this home. It appears he always lived near the brickyard, first at a house on “Bluff Road,” then near 30th Street and 7th Avenue, and finally here at the house on 10th Avenue. The home was probably built from bricks manufactured at Atkinson’s brickyard.

According to memoirs by Sylvester W. McMasters, Atkinson was in partnership with Elisha P. Reynolds for brick making. Their first brickyard was located near 7th Avenue and 29th Street, but not finding enough clay, they moved up the hill. That brickyard continued in operation with William Atkinson & Oloff.

Atkinson was credited for constructing the first Rock Island high school in 1858, which was torched just before the school system took occupancy. Other significant buildings constructed by Atkinson include the Buford Block, Rock Island Plow Works, Rock Island Water Works and the residence of P. L. Mitchell, another Rock Island Landmark, at 1131 2nd Avenue. Atkinson’s firm is also credited with laying the first brick streets in the city.

Christopher Atkinson, who was born in England in 1819, married Ann Lambert, who was born in England in 1821. They arrived in Rock Island sometime between 1847 and 1850, but had earlier lived in Rochester, New York and Canada. They had six surviving children, with Lavina, Lillie and Rose all born in Rock Island before 1857. William was the oldest child, born in 1841 in Canada.

This Italianate home has extraordinary windows, with twelve panes in each, and much of the old wavy glass is still intact. Square nails were used in the construction of the house, and the dugout basement under the south bedroom has a tree stump in it.