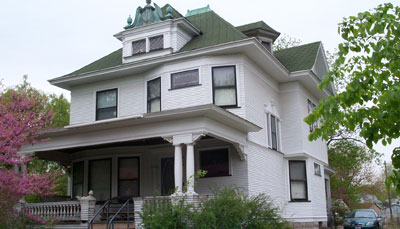 
Broadway homes were popular because of their proximity to downtown Rock Island. The first owner of this home, Henry W. Tremann, most certainly walked to the family’s downtown meat market. Henry W. was the son of Henry Tremann, founder of a large, well-known meat market, which was located at 17th Street and 3rd Avenue. Henry W. served on the board of directors at the Central Trust and Savings Bank and eventually became the vice-president. The Tremanns lived here for nearly 50 years until the home was sold around 1952.

The Schoessel House at 1330 20th Street is almost a twin. This 1903 home is transitional between Queen Anne and Colonial Revival styles. Notice the leaded glass in the windows of the second floor dormer. The copper broken pediment above the dormer, dentils under the large friezes and Tuscan columns are all Colonial Revival elements. Take a special look at the stairway window on the north side.