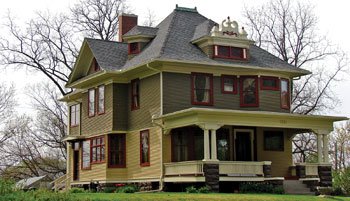 
Built in 1910, this home was influenced by the asymmetrical subtype of the Colonial Revival. The outstanding ornamentation includes a dormer crowned with a prominent broken ogee pediment topped with an acorn-shaped finial, paired Tuscan porch columns, Tuscan colonettes surrounding the front door, unusual porch skirting and liberal use of dentils. There is also a beautiful Arts and Crafts stained glass window in the front facade.

There are three houses very similar to this house in Rock Island. In particular, 916 17th Street is very similar. It is suspected, but unsubstantiated, that the same builder constructed all four houses.


The first owner of this home, Christian August Schoessel, was a local businessman involved with the ice and coal industries. His second wife, Myrtle Dade Schoessel, was a former supreme recorder for Royal Neighbors of America. She quit her position as supreme recorder to marry, but went back to Royal Neighbors 17 years later as editor of The Royal Neighbor and historian of the fraternal life insurance company. After she retired in 1949 at the age of 77, she took up oil painting, and enjoyed local recognition for her artistic accomplishment.