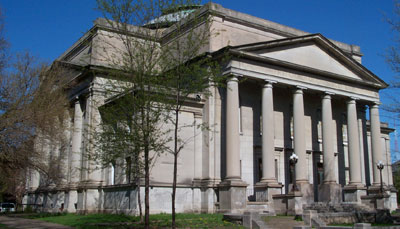 The church was built in the Palladian style in the shape of a cross at a total cost of $11,400. It is constructed of smooth-faced Bedford limestone over brick. A temple-like porch with six massive stone columns decorated with egg and dart capitals and topped by a pediment frame the main entrance. On the north and south, the illusion of columns is created with pilasters attached to the walls. Three sets of heavy, bronze, nail-studded doors feature full-length beveled glass. The dome of the church is actually two domes, the outer protecting the inner. Eighty-four electrical lights encircle the outer dome. The inner dome features 8,000 fish scale panes within 16 sections divided by wood braces.