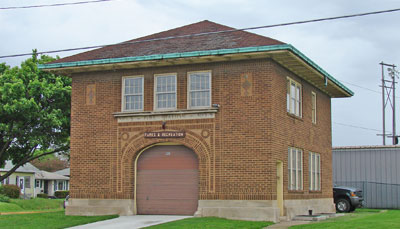 
Prairie-style fire station with a high degree of integrity.

Fire Station No. 5 became operational on February 2, 1915, finally servicing this area of southwest Rock Island. Just one month earlier, August Schmidt had been appointed as captain of the new hose company. He had previously been the captain of company No. 2 at 319 8th Street, but was appointed to the new position by Fire Commissioner Archie Hart. Other original No. 5 fire fighters were William Bach, Ben Stephens, Harry Blocklinger, and Otha Kinne.

The new fire station cost $15,611 for construction of the building and equipment. The most expensive item was the structure itself, which cost $6,668, and was the work of contractor H. Tappendorf. The La France fire truck cost $6,000, just $668 less than the building. Two thousand feet of hose were purchased at an expense of $1,600. The heating, installed by Ward & McMahon, cost $600. The plumbing was put in by Channon & Durfva for $468, and the electric work was contracted to Electric Machinery & Construction Company for $275. At the time, a Moline vacuum steam heating system was installed, and a tub and showers were among the amenities for the members of the company.

Fire Station No. 5 is a two story wire cut brick Prairie-style structure, topped with a hipped roof. Originally, the roof was covered with red clay tile. The square building has copper gutters and deep eaves with exposed rafters. The truck door has been changed, but the opening, with its brick trim remains the same. The arched opening is formed by bricks laid three deep in alternating horizontal and vertical sets. There are additional details formed by bricks mortared into a circle and then set into concrete. Incised stone above the entrance says "No. 5 - Fire Station - No. 5." Three eight over eight double hung wood windows are situated above the stone sign. On either side of the window set are diamond-patterned red square tiles inlaid with green and set in tan-colored concrete. The foundation is stone. Other elevations are relatively simple, with unadorned brick walls and windows.

Eventually, the fire station became too small to hold modern vehicles, and the building was used by the Parks Department.