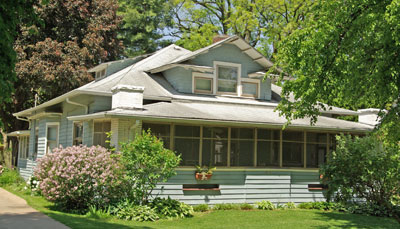 This house is an unusual Craftsman style home because of its hipped roof. This style, which has roots in California at the beginning of the 20th century, is characterized by wide overhanging eaves with visible rafters. Both the front gable and side shed dormers on this house show these features. This one-and-a-half story house with its horizontal emphasis has a solid porch railing and tall brick corner columns extending from ground level to above the porch roof. These features also help identify it as a Craftsman style home.

First owner Frank Weller was the superintendent of the Carriage and Buggy Department at the D.M. Sechler Carriage Co. in Moline, which sold the "largest and best variety of vehicles made in the West." Previous to this he was employed by four other carriage companies in the Midwest, including the Fostoria Carriage Co. in Fostoria, Ohio, and by Studebaker Brothers in South Bend, Indiana. He and his wife, Zuah, had four children.

In 1916, the house was sold to George and Florence Borg. Mr. Borg was the son of Swedish-born Charles Borg, a senior member of the firm Borg & Beck, manufacturers of machines for farm implements. The factory held patents for the following, among others: the Borg automatic wagon tongue shaping machine, a porch column machine, an automatic wheel sanding machine, and the Borg automatic stave trimming and grooving machine. George, who was secretary and general manager at the firm, had taken business courses at Augustana College. In the process of machining clutch casings for Velie, George Borg, Marshall Beck and Gus Nelson invented a new clutch in 1909. George Borg opened a new operation in Chicago, and moved in 1919. Previously impoverished Charles Borg sold his interests and ended up a millionaire. George went on to consolidate major parts makers, forming Borg-Warner Corporation. During the 1920s, this company was capitalized at $90 million and George Borg was elected president.