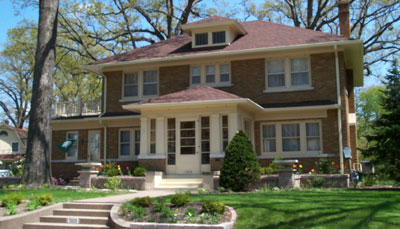 Charles Borg was born in Sweden in 1861. He came to the United States in 1881 after having served as a ship’s carpenter at the age of 16. Charles became known as an accomplished carpenter and furniture maker. In 1893, for the World's Fair in Chicago, Deere & Company commissioned Charles to create the “Columbian Peace Plow,” which was a plowshare composed of historic swords. Some 22,000 metal relics went into the alloy from which the blade was cast. The beam and handles contained thousands of historic wood relics, some no bigger than a dime. The Columbian Peace Plow was exhibited at Bunker Hill, in several states, on the battlefield of Runnymede, the Paris Exposition of 1900 and at numerous world peace meetings in Europe. The plow was to have its home at the National Museum in Washington.

In 1903, Charles began his own factory with Marshall Beck. He had gradually accumulated great knowledge of automatic machinery by replacing simple tools with practical machinery for labor saving in the factories. Charles’ first successful patented machine was an automatic shaper for wagon tongues. Charles designed adaptations of his machine for other complicated shaping operations and built up a successful company. In a few years Borg & Beck had patented and were producing devices which were generally rated among the finest woodworking equipment in the country. A sideline to the business became machined parts for automobiles. Eventually, an engineer from the Velie Company called on Borg & Beck with a clutch problem. In 1910, Borg & Beck began manufacturing the sliding clutch, which had been developed by George Borg, Marshall Beck and machinist Gus Nelson. Soon the company was supplying clutches for more than a dozen automobile manufacturers. Charles Borg and Marshall Beck decided to sell their interest in the phenomenally profitable Borg & Beck Company in 1921. Charles’ son, George, handled the sales and mergers of the company into what eventually became the Borg-Warner Company, which was worth a stock value of $90 million in 1928.

The house was built in 1930 in a restrained Prairie School style, but it has strong Classical influences on both the exterior and interior. The horizontal emphasis of the Prairie style is visible in this house through the low-pitched, hip roof, widely overhanging eaves, the first story eave and the elephantine columns. The house is a square subtype of this particular style. Original renderings of this house are signed by Charles Borg and bear strong similarity to what was eventually built. The house contractor was the Axel Carlson Company of Moline.