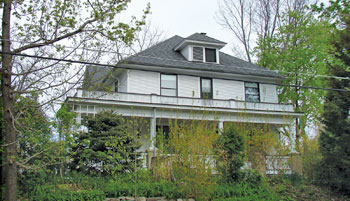 One would be hard-pressed to find a better-loved professor in the long history of Augustana College than Edward Fry Bartholomew. Although this was not the first house in which Bartholomew lived when he left the presidency of Carthage College to become professor of English here in 1888, it is closely associated with him and his family. Throughout his 44-year tenure at Augustana, Bartholomew was a persistent reformer of the curriculum, often eschewing the classicism of his disciplines in favor of what he saw as best for the future of Augustana.

Known to past students as Augustana's "Grand Old Man," Edward Fry Bartholomew was born in Sunbury, Pennsylvania, March 24, 1846. Bartholomew received his B. A. degree from Pennsylvania College (later known as Gettysburg College) in 1871, graduating with high honors. He also earned his M. A. degree from Gettysburg College in 1874. In 1874, Carthage College in Carthage, Illinois, offered him the chair of Natural and Physical Sciences. He stayed at Carthage College until 1888 serving as a professor, and then president. In the spring of 1888, he resigned from Carthage and accepted the chair in the English Literature and Philosophy departments of Augustana College and Theological Seminary.

The position at Augustana College and Theological Seminary was to be his last and longest, extending over a period of 44 years. Bartholomew taught steadily until 1932 when he resigned his teaching position at Augustana. Though retired, he was recalled in the spring of 1935 to teach two hours a week. He was 89 years of age.

In addition to his teaching responsibilities at Augustana, Bartholomew would also often offer chapel sermons or devotions on campus and was active in the community. He was widely known in the Quad Cities area as an eloquent speaker and lecturer. He authored several books, including, most notably, The Relation of Psychology to Music (1899 and reprinted 2008), The Psychology of Prayer (1922), and Biblical Pedagogy (1927). He also served as pastor of five different congregations at various points in his life.

He celebrated his one hundredth birthday on March 24, 1946, and received callers though he was recovering from a stroke. He passed away a few months later, on June 10, 1946.

Dr. E. F. Bartholomew's papers were donated to Augustana College by his daughter Netta C. Anderson, herself a person of note as one of the earliest female graduates of Augustana College and founder and first president of the Augustana College Alumni Association. The papers are very broad in scope but consist mainly of teaching materials and various writings. The collection has been organized into sixteen series: Personal papers, Education, Mt. Morris College, Carthage College, Augustana College, Published works, Manuscripts, Addresses and sermons, Lectures and lecture notes, Kate L. Bartholomew, Scrapbooks, Books, Photographs, Postcards, and Artifacts.

Bartholomew's last home was built in 1908 by Paul Bartholomew, E.F.'s son. At the time this house was constructed, Paul was employed by John Volk & Co., one of the largest builders in the area. He constructed a large, one and a half story carpentry shop at the rear of the property. From here, Paul designed and built this grand Foursquare house for his father and himself.

When Paul died in 1974 at age 90, his heirs sold the house and carpentry shop intact to the next owners, George and Zen Henning. What the Hennings received was an incredible collection of homemade storage containers and odd tools. They found storage drawers made from cigar boxes, wooden pulleys, brass door knobs and other evidence that nothing was ever wasted. Paul was the ultimate recycler, making storage from pressed cans and chalk boxes. For their long-term preservation of the house and its unique carpentry shop, the Hennings received an award from the Rock Island Preservation Society in 2003. The home was also featured in an episode of the HGTV series "If These Walls Could Talk" in 2002.

The house is amazingly intact from when it was constructed by Paul. This classic American Foursquare house is box-like and two and a half stories tall with a hipped roof. The hipped roof dormers contain paired windows. A low balustrade forms a second-floor sun porch that tops the full width porch with its classically influenced columns. The columns rest on poured concrete piers, which are uncommon for the time. Other porch details include dentils and straight balusters, matched by straight boards in the porch skirt. The asymmetrical placement of the door, which is a feature of Foursquare homes, contrasts with the balanced windows on the second floor.