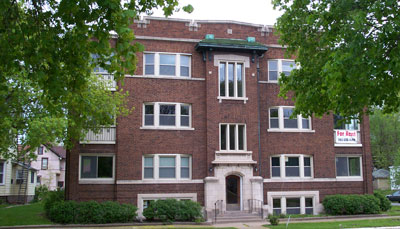 John A. Weishar, an electrical contractor with the downtown firm Leithner and Weishar, built this Mediterranean-influenced apartment building in 1914. Its construction nearly 40 years after the rest of the homes on this block attests to the enduring popularity of 20th Street.


The entry and trim on the brick apartment are sawn stone. A segmented arch leads to a beautiful foyer in black and white marble with a hexagonal tile floor. Each apartment originally had French doors, which opened onto a small iron balcony, but these and other original windows have been replaced. A photograph taken shortly after construction shows canvas awnings on the south and west-facing windows. Awnings were an early and effective way of keeping the hot summer sun from heating living spaces.