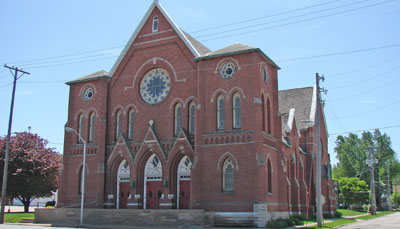 
The only Rock Island church designed by prolific local architect George Stauduhar, who designed hundreds of churches across the Midwest.


For many years there were only two Catholic churches in Rock Island, one for those who spoke German (St. Mary’s) and another for the English speakers (St. Joseph’s). But as Rock Island grew towards Moline in the 1890s, another English speaking church was needed. The church was to become the center of neighborhood life in the surrounding area called Greenbush, which was filled with Irish Catholics, many of whom worked for the railroads. At the time they bonded together due to anti-Irish and anti-Catholic sentiments. Over time the pastors were clearly selected for their ties to the Irish community, with names like O'Neill, Fitzpatrick, McGinn, Murphy and Cunningham.

Rev. Joseph Lockney organized the new congregation called Sacred Heart in 1898. A small frame church was immediately built on the site of the present church, and an adjacent house was purchased as well. When it came time to build the new $40,000 church in 1901, the Ben Harper House was moved slightly east, where it still serves as the rectory.


The new church was designed by local architect George Stauduhar, a prominent designer of churches throughout the Midwest, and the contractor was John Konosky, whose office was very nearby at 2828 5 1/2 Avenue. In many ways, the church is typical of Mr. Stauduhar’s style, which is often termed “eclectic,” meaning that he combines a variety of elements into a single building. The steeply pitched roof, pointed arched openings at windows and doors, and the round “rose” windows are all elements of the Gothic style. The many stained glass windows are believed to be original. Transoms above the three main entry doors have unusual “paisley” shaped jeweled windows incorporated into their relief molding. On the inside, the historic architecture and furnishings are intact, including beamed ceiling arches and richly ornamented pews. Even the original Henners pipe organ is regularly maintained and used. The organ was donated by Simon Burns, formerly of Rock Island, who became a labor leader in the East, as a memorial to his mother, Mrs. Mary Simpson.

The church is odd in that it appears as though the front towers should have steeples. An article in the July 20, 1900, edition of The Argus indicates that there were to be two towers on the north end, with the one on the west side reaching 156 feet high and the one on the east reaching 136 feet. These towers were never built and may never have been included in the Stauduhar designs.