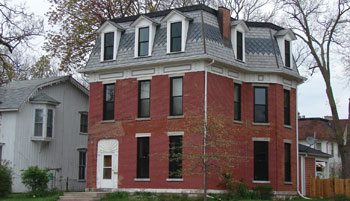 Dr. Samuel Plummer was born in 1821 and came to Rock Island in 1848, where he practiced medicine for 50 years. He served as 2nd Ward Alderman in 1858-59. Upon his return from the Civil War, Dr. Samuel Plummer had the house next door (705) built. He resided there with his wife, Julia, and their five children for a number of years.

Julia died in 1872 and two years later, Dr. Plummer remarried and decided to build a new home on the same lot for his second wife, Sarah. This home (709) was completed around 1880. Dr. Plummer died in 1900 and by 1940 the house had been split into separate apartments.

This French Second Empire home has unique stylistic elements at the top and the bottom. The mansard roof effectively adds a full third story to the house. The shingles on the roof replicate the original hexagonal and rectangular pattern, but the materials are actually a synthetic slate made of recycled tires. The stone foundation was tooled with an uncommon vermiculated, or wormlike, texture and deserves close examination. The front doorway is recessed and has an elliptical top, which likely once held a transom window and double doors. In the early 1900s, a wrap around porch was added to the house, but it originally featured a stoop with a heavily bracketed canopy.