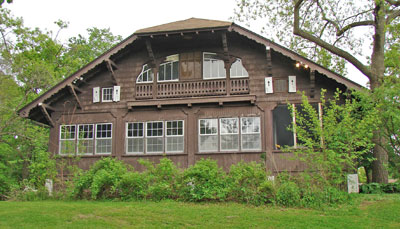 O.C. Simonds began designing Long View Park in 1902, but the project would take many years to bring to fruition. In 1917, nine years after the park officially opened, came another round of major improvements. That year, an authentic Swiss-style chalet was built at the highest point in the park, just above Stag Hill. Originally referred to as the Inn, its appearance soon had everyone calling it the Chalet. Plans were purchased from Swiss-born architect Frederich Ehrson of Reading, Pennsylvania, although local architect George Stauduhar is thought to have worked on the interior design. John Volk & Co. built the building at a cost of $10,000. Typical of its Swiss antecedent, the picturesque building was finished in stucco with timbering and featured wide eaves overhanging broad porches. Beneath each window was a flower box.

Inside, the Chalet's large main room was used as public space. According to reports in The Argus, it had a very high ceiling with stained glass windows near the top. Interior walls were of a marble wainscoting and the ceiling was frescoed. The southern portion of the Chalet was fitted with rooms to house a caterer's family. This living space was designed with all the latest conveniences, including city water, electric lights, and furnace heat.

The public use of the Chalet would eventually end and the building was converted to a strictly residential purpose. Up until today, the residence is home to a park caretaker, usually affiliated with the grounds and gardening aspects of the Rock Island park system.