The City of Rock Island promotes healthy living with its numerous bike trails, bike lanes, and bike routes. The paths are scattered throughout the City and include on- and off-road corridors. The Rock Island Bicycle Map is helpful in planning the best possible route to take, whether for recreation or commuting.


The City also has two designated bike lane corridors on major streets. The designated striped lanes are on Seventh Avenue between 17th Street and Mill Street (Sunset Marina) and on 17th Street between 31st Avenue and Blackhawk Road. The bike lanes provide cyclists a much safer experience on the roads. The Quad Cities Bicycle Club also has numerous valuable resources for biking in Rock Island and the Quad Cities. 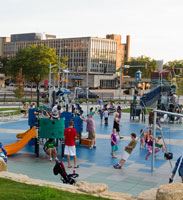