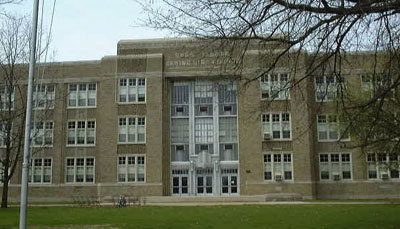 
Enduring and restrained design of the Art Deco-style high school.

The visionary choice of this important bluff-top site for the high school could almost have been forecast in 1929, when construction on the stadium at the east end of the campus was begun. The 1930s were a busy time for school building in Rock Island, and, in the middle of the decade, the Works Progress Administration allowed the school board to build a new high school. Additional land to the west of the stadium was purchased, drawings were made, and excavation was begun in 1936.

Although local architect Benj. A. Horn is the architect of record, at least two other architects had significant artistic involvement. Chris Maiwald, who was unlicensed at the time and worked for Horn, reportedly did much of the design work on the high school. Maiwald had worked for Horn since the early 1930s. A rendering of the school is signed by him. Maiwald later went into practice for himself in Rock Island. Additionally, a set of drawings signed by St. Louis architect William B. Ittner, an accomplished Deco style designer, also exists. Rock Islander Ben Gest was the structural engineer for the project. Since the National Guard Armory, the high school, as well as a Horn-designed high school in Reynolds, Illinois, were all completed about the same time, the sharing of design work seems realistic since Horn did not have any partners in his practice at this time.

In the original plan, the school was U-shaped, embracing the top of the bluff, and presenting the river a facade nearly as impressive as the east-facing front facade. Later additions to both arms of the U were also designed by Horn. The south wing, built in 1958, contained a field house, swimming pool, and, unusual for the era, an elevator. A decade later, more classrooms were added on the north wing, and a concourse linking the two wings was established.

The Art Deco styled Rock Island High School is a very large, irregular shaped two and three story buff brick and stone complex, with a flat roof. The long central part of the main facade is flanked by the gymnasium wing on the south and the auditorium on the north. Art Deco features of the school complex include the vertical emphasis provided by the brick piers that frame the window panels, the curving edge of the parapet wall, exterior vertical fluting, and the massive Egyptian temple-like treatment of the gymnasium and auditorium facades.

The wide central section of the high school is symmetrically arranged, as are the two major wings that flank it. The central part of the main facade contains three pairs of entry doors with divided glass transoms, above which are vertical rows of small paned metal framed windows. Above these windows is the name of the school in applied stone letters. The treatment of the design of the aluminum framing around the center pair of entry doors deserves special note. Over the doors there is a tall aluminum design feature with vertical fluting. It rises to a peak in the center, reminding one of a city skyline. On each side of the center pair of doors are tall aluminum lanterns with vertically ribbed glass panels. The vertical emphasis is carried on down through fluted sections in the metal panels on either side of the doors. These vertical fluted panels also extend upward for two stories.

On either side of the three-story entry element are slightly projecting sections with rows of three tall 12 light windows at each level. The gymnasium and auditorium wings are similar in design, each with three part entry doors with divided glass transoms. Dividing the paired entry doors are massive round stone columns. Surrounding the entire entry elements are fluted stone frames. The other wings and sections of the high school display a similar design treatment as those used on the main façade.

The design of the classrooms and hallways is utilitarian. However, there are Art Deco touches in the vestibule, lobby, large auditorium and especially the “Little Theater” on the north side.

Use of Aluminum as a Decorative Metal

Aluminum as an architectural material reached its aesthetic peak in the Art Deco years. Where previously bronze, brass or cast iron was used ornamentally and structurally in architecture, the 1920s and 1930s emphasized the beauty of “white” metals - generally aluminum or stainless steel (silvery chromium plate was a common finish on small artifacts). Aluminum was considered as precious as silver in the 1890s, when it first became available for use. Because it is refined electrolytically from its ore, the metal could not be made in quantity until electrical power was available.